As a very serious aside (no, actually, I shouldn’t call it an aside, this is more important than an aside), Jason Momoa said a really awful thing at a panel for Game of Thrones back in 2011, and it came to light in the past few months when Justice League was getting promoted.  He was on a panel for season 1, and mentioned that the show was great, because, among other reasons, he gets to “rape beautiful women.”  It’s a garbage thing to say, and his fellow panel members were visibly uncomfortable, and there’s no justifying it.

I am willing to look past this comment, partially because he has been a good dude otherwise, but in large part because his apology was a genuine, non-hedging, and responsibility-taking apology.  He offers no excuse, he does not try to explain himself, and he begs forgiveness while saying he doesn’t deserve it. All the above still being true, I am writing this post because I think he has been better than that comment shows.  It’s an enormously unacceptable thing to say and there’s no fixing it, but it was one black spot in an otherwise unproblematic career of public appearances, and he knows it was stupid, and *shrug* I’m gonna forgive him.  On to the rest.

I saw him as Aquaman in Justice League, and despite being criminally underused, he was an enormous smiley tattooed piece of driftwood and this post is for you, my guy.  I think you are good and had a moment of stupid and I still want to hug you and let you braid my hair.  I feel like you know how to braid hair. 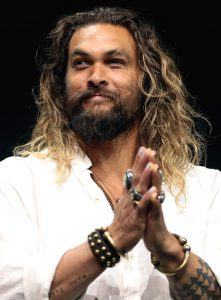 My albacore tuna was born in Hawai’i, to a Native Hawai’ian dad and a mama who is white and Native American.  His mom raised him in Iowa, but he’s spent enough time in the state of his birth that he swims and surfs and all of the obvious stuff that relates to his casting.  I’m assuming he owns a trident, because why would he not?

In the late 90s, he was discovered by a designer who told him to go into modeling because duh, and unf, guys, he was so pretty.  Just as handsome as he is now but a different kind of pre-millenium pretty.  And, of course, because of who he is and what his torso is, he got cast in Baywatch: Hawaii, which is exactly what it sounds like. 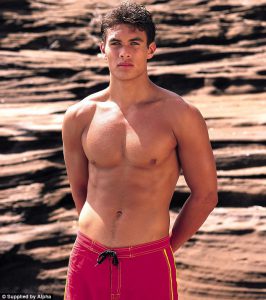 He’s also only 38 which I forget sometimes because sometimes very large people are older to me??? I don’t know how to explain this but like, every Strongman is born at 40 years old.

Game of Thrones. Obvs.  It is pretty remarkable how he took what could have very easily been a nothing role and made it into something people cared about.  It is also remarkable because Drogo is Not Good.  He is a bad guy who hurts women and kills men and uses his strength to wreck other khalasars and dies because he’s stupid.  And we gave Momoa this role and suddenly the entire world is like MY SUN AND STARS because he was deeeeeelicious with his hair and his beard and his growly Dothraki and the eyeliner and the butt and the gold-murder and all of it.  This is a testament to just how pretty he is, because he spends the whole of the season covered in blood and dirt and we’re still collectively like I WILL BE YOUR KHALEESI.  Those blue stripes he has at their wedding? I don’t care that he’s a violent tumbleweed, I want it.

You’ll also know him as Arthur Curry, which was an ideal casting choice and if they do anything good with the Aquaman movie (and I have hopes) then Aquamoa is gonna wreck us.  The tatts were clearly an excellent choice, and I spent his first scene in Justice League being simultaneously thrilled that they put him in that cozy sweater and then hoping he would take it off. Is a half sweater an option?  Like that thing Katniss wore in Catching Fire? 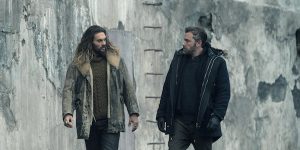 This stupid cozy jerk ugh his movie is gonna murder me

Conan the Barbarian. Was this movie good? No.  But was he particularly good in it? Okay *also* no.  But was it fun and was he just ridiculously enormous and was it a waste of my time? Nah. He’s clearly having a good time with a ridiculous role, and he trained for it, and if you’re bored one day go watch it, he is glorious and as attractive as ever.

Secondly, Stargate Atlantis.  I’ve only seen a few episodes of this show, but his dreadlocks alone deserve a mention. Here my enormous tanned fish gets to do more with more, and he seems invested in the show, and my guess is that his dedication to this one is part of what got him the Khal Drogo audition, and the Conan part.  Showrunners are not looking for actors who will shit all over sci-fi or fantasy as unelevated or whatever garbage they think genre fiction is, and Momoa takes this stuff seriously.

Third, and yes, I’m serious, his audition video for Game of Thrones. This confident intense cinnamon roll of an alpha male showed up and did the Haka for his audition and I can only assume Benioff and Weiss were like “even we didn’t think this could go this well you’re hired and we’re scared and turned on” IT’S SO GOOD.  He didn’t have to go that hard but he did that, for us, Jason, our sun and stars oh GOD I’M DOING IT TOO

I might argue that Momoa is most well-known for his relationship with Lisa Bonet, who is 12 years his senior and who is the mother of Zoe Kravitz.  They’ve been together since 2005 and they have two kids together and they are just beautiful and so in love and Zoe likes him and every time he talks about Lisa he is just starry-eyed and giggly and is just gushing about how wonderful she is and how wonderful their kids are and as much as I want him to build me a cabin so we can live in it I never want to break them up ever because they are pure and I want to hang out with them. 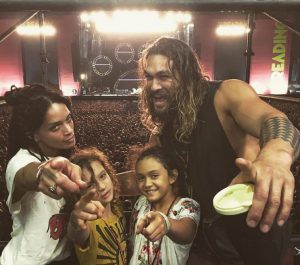 They just got married in November and they are so great and I hope they raise tiny little wolf-children who can surf and wield tridents and just be gorgeous like their parents.

My guy also got slashed IN THE FACE WITH A BOTTLE in 2008 and had like a billion stitches and has that scar on his eyebrow which has somehow made him even more handsome???? Like if an author wrote about a battle scar that looked like his the editor would send it back and be like “stop it scars don’t happen that naturally and they don’t make people more handsome” and then this charismatic jerk walks up and is like “you rang?” and the editor is like “I stand corrected but I kneel at your feet” and Jason Momoa picks him up off the ground and he and the editor and the author all go surfing together and then Jason makes them margaritas after.

He just seems earnest and fun and genuine and I love how he is simultaneously the best parts of a free-spirited water nymph, an alpha male bro, and a supportive buddy.  His castmates have all good things to say about him and his work ethic, and as much as he postures, it is all in a sort of “aren’t I ridiculous, isn’t this entire industry ridiculous and aren’t I lucky to be a part of it” way.  He makes the shaka sign (that “hang loose” hand gesture) allllll the time, and it never reads as a “I don’t care about this” flippancy, but rather as a “I see you and we could be friends” sincerity.

He’s smiley in every freaking interview, and when he’s stopped by fans, and he could be like “I am Too Beautiful to be bothered by you mere mortals” but he’s just so. fun.  He’s like 1/3 enormous child 1/3 teddy bear 1/3 thighs and he’s still just Really Excited to Be Here and I want him to give me a hug and take me to the place where he saw the most beautiful sunset.

Watch some of his interviews, listen to him talk, get jealous of his tangled-yet-beautiful hair, and just be thankful that he gets to run around with his forearms tattoo and his compliments to talk-show hosts.  He is a ray of sunshine who loves his family and looks like someone who could drink you under the table but volunteered to be DD tonight.  He made you a necklace and wants to take you skydiving.  He could squish your skull with his triceps but he’s trying out a new recipe tonight and asks if you could come over.  He’s just *so* *cool* and I’m genuinely looking forward to seeing what he does with his full Aquaman movie and I will gladly celebrate his and Lisa Bonet’s 50th wedding anniversary.  Stay baller, my glorious tanned sushi chef.

Six reasons why I complain sometimes.