Hey, everyone!  Did you think I was joking? Because I was not joking even a little when I said I would start a series reviewing romantic comedies.  I’m more than happy to take requests, and I’m starting with one of my favorites. 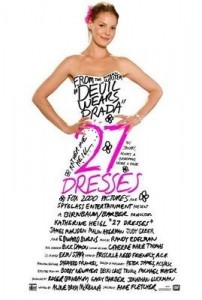 Best scene: Singing Benny and the Jets at the bar

Best line: “oh, do you also go around telling small children that Santa Claus doesn’t exist?  Because someone needs to blow that shit wide open.”

You wanna go, on this?  Let’s go.  This is a great movie and I will fight you on it.  Not joking even a tiny bit.

For those of you who aren’t In The Know, this movie is about Jane (Katherine Heigl), a woman who has been a bridesmaid in 27 weddings so far and pretty much takes care of everybody’s life.  She is crazy in love with her boss (Edward Burns) who has no idea, and the drama begins when her younger sister Tess (Malin Ackerman) comes to town and they of course start dating and then of course get engaged and of course Jane is maid of honor of COURSE.  James Marsden plays Kevin, the journalist covering Tess’ wedding.

There are a couple slight missteps in this movie, I’ll admit that.  When Jane finds out that Kevin is, in fact, her favorite wedding columnist, her response is “I feel like I just found out that my favorite love song was written about a sandwich.”  First of all: no. No, you don’t.  That’s a very specific emotion and I doubt you’ve had it before.  Secondly: no, that’s not how people talk.  Like what, you had that line prepared, in case…that happened?  Noooope.  It’s kind of a shame, because the rest of Jane’s lines are totally reasonable (she shoots down Kevin early on with a “oh, how refreshing! A man who doesn’t believe in marriage!” which like HELL YES good job lady).  Also, Judy Greer is a great Sassy Best Friend (SBF) but ugh I feel like this girl has a reasonable negligent infliction of emotional distress claim on all of Hollywood.  Let her be something else.  In addition, this is a White People Movie, and there are some actual racist jokes in this movie, including Jewish and Indian stereotypes in the opening scenes, and a moment in a Japanese wedding where lol Katherine Heigl has to lol kneel because she’s so tall and Asian women are lol short lol um no can u not.

Finally, can someone please explain to me the appeal of Edward Burns please and thank you.  I just Do Not Understand.  He is so generic that I regularly forget his name (I have called him “the dude who isn’t Matt Damon or the translator who inexplicably lives through Saving Private Ryan”), and every line he delivers makes me want to yell CAN YOU SPEAK UP PLEASE.  Like he could be “you know that guy Todd, from work” at every single workplace.  idk, sorry if he’s your thing, but he’s like every generic above-average white dude in a bar to me.  Wear those khakis, Ed.  BE the khakis.  You ARE the khakis.

ON TO THE GOOD STUFF

I will admit, part of this is because when I saw this movie, I was straight off the high that was Disney’s “Enchanted” where he plays the most perfect prince to ever prince so he could have phoned this in entirely and I still would have loved him.  HOWEVER HE DID NOT AND IT’S AMAZING.  He is a perfect romantic comedy lead: he has the good timing lines, he’s freaking adorable, and he’s like honestly not too much of a dick?  Yes yes yes I agree the newspaper column was some bullSHIT (homie you knew she was gonna publish that, you KNEW) and frankly do not write in a woman’s planner ever or she will justifiably murder you but STILL.  His divorce backstory is believable and delivered well by Marsden.  And finally, can I just…

This scene is everything, my heartttttt.  I appreciate that the film recognizes that this song is a great way to get a bunch of strangers to sing together, and that no one has any idea what the fuck the lyrics are.  Heigl and Marsden are too adorable to function in this scene and I start giggling every time I hear this song and THIS SCENE IS THE FEEL-GOOD MOVIE OF THE YEAR OKAY FIGHT ME I LOVE IT

So many people walked out of the theater like “I do not like this woman but…ah, shit, she’s delightful here.”  Like, we buy that she looks like Katherine Heigl but is somehow the long-suffering uncool sister/friend.  Like HOW DID YOU PULL THAT OFF.  There were people ready to straight-up murder you for something related to Grey’s Anatomy (I don’t watch the show I’m assuming it was mafia-related) and you just showed up and SWING AND A HIT.  Not since Jaime Lannister have we had a redemption arc this impressive and then probably fucked up by some writers DID YOU MISS ME, GUYS

I don’t know the team responsible but God bless you all.  They are beautifully over-the-top, the scene where she tries them on is a ridiculous and delightful montage, the shiny-ness of some formal fabrics is demonstrated To Great Effect, and man, weddings can be weird.  I have not been in a wedding or at a wedding where I was like “wut happened this bad” but man you get stories and pictures and weddings are WEIRD, yo.  Also has anyone actually been to a Gone With the Wind wedding because TELL ME EVERYTHING PLEASE I MUST KNOW.

This is a silly thing for me to appreciate but this movie goes H.A.M. on the “what the fuck do they even do at this workplace” front and it’s just AMAZING.  I love it when romantic comedies give the heroine the vaguest job possible and this movie is just A+ and it makes me laugh every time I see it.  Like she could work for Subaru’s ad department or a trendy dentist I have no idea and it will never ever not be funny.

You know the weird cattiness that surrounds a lot of these movies?  Like someone cooked down The Bachelor and Bride Wars meth-style and injected it into every female character and then yelled ACTION?  Could have been SO easy here, and it didn’t happen.  Jane saves all of her bridesmaid dresses, and when questioned by Kevin why she would do that, she says “I have a lot of friends and I like to keep them” and “I’ve had a lot of really good times in those dresses.”  Like, awwww.  Good job boo.

Additionally, Jane is Stressed Out because of her sister dating her crush, but she is genuinely not angry at her until her sister pulls the big no-no of both lying to the dude and cutting up their mom’s wedding dress for her dress.  The movie doesn’t treat Tess that well, but you know what? Jane actually does, and when Jane’s SBF says “you cannot plan your sister’s wedding to the man you are in love with, it’s sick,” Jane responds with “to be fair, she didn’t know I was in love with him when they got together.”  Oh my goodness, movie, you did good.  Jane struggles with her jealousy but isn’t like “bitch I saw him first” at ANY POINT and I’m just SO IMPRESSED.

Her giant moment of selling Tess out and calling her on all her lies is soooo uncomfortable that I have muted it and/or skipped past it while watching (I cannot cannot watch people embarrass themselves in front of other people not even in movies I cannot), and the movie actually lets you feel complicated emotion towards it.  On one hand you’re like OOOOH BURN GO JANE but when the SBF comes out and is like “if that were the right thing to do, wouldn’t you feel better about it?” Because yes, she probably did need to say something, but at a party in front of everyone who matters with a slideshow is not the time or place or fashion.

They also make Tess a Real Person with Real Stuff to deal with and you’re supposed to hate her a little bit but not a lot!  Which is remarkable!  She’s a gorgeous woman in fashion and she’s allowed to be a human!  With flaws!  Who is still worth loving!  Holy SHIT, movie!

I just appreciate in movies when women are nice to each other and do things for each other and while this is not a perfect representation and I could have done without the “lol she made them all wear their dresses at the end” bit it’s still really really adorable and she has her friends and she’s got her SBF and she’s got her sister and awwww.  I love it.  I love it I love it it was great and I will watch it at any time or place.

Well, no offense to Eleanor Roosevelt.

Six reasons why I complain sometimes.

Stop it with these GoT articles. Just stop.