Not a Meathead Monday post, but hopefully the pupdate will make up for it.  Donate button is to ya right and will be used for peanut butter for Bailey.

The Majestic Bailey has now been a part of our household for 6 months, and not to brag, but she is absolutely killing it as a dog.  Just top-notch dog behavior.  She is the cutest thing in the entire world and has gotten a little bit bigger and she needs to be able to go to the dog park like, yesterday.  Seriously, please wish for warmer weather because she misses her friends and needs to drag race them.  She has made a friend named Lola at our complex’s small dog park and they run around so good, which helps a lot, but I want to take her where there are like 30 dogs.

We have lucked out enormously with her behavior- and difficulty-wise, and while I love all dogs, I am very thankful that she is 85% chill.  She doesn’t bark (she has barked maybe 20 times in 6 months and it has nearly always been because we were sassing her); she is chill with all other dogs and all other people; she came to us housebroken and had one accident her first week and that was on us because we were like “you just went out you don’t have to go again” SPOILER ALERT she DID have to go again; she is a very good eater and isn’t picky; she is crate-trained, and while we do our best to have her out of there as much as possible she goes in without protest; she is Supremely Unbothered by literally everything.  She is…not small, so it is like, a lotta dog in our not-huge house, and she can get mouthy sometimes, but she’s just a very good girl who gets excited. 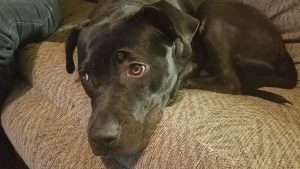 life is so hard when u r adorable 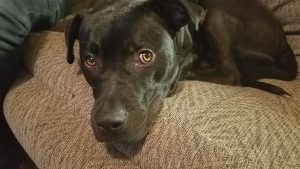 SO HARD U GUYS

There are certain highlights and lowlights of doggie ownership that are somewhat universal. 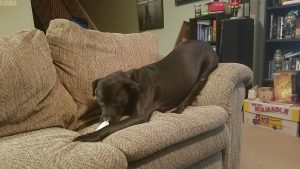 The Shape of Doggo 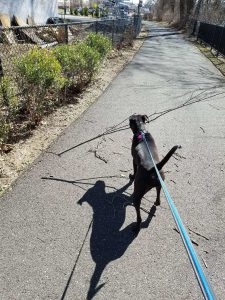 ANYWAY that is the State of the Bailey.  She’s beauty and she’s grace, she’ll fall right on her face.  She is soft and great and I love her forever.

Whatever you did for one of the least of these