Hey friends.  Here is the first post in a series I will be doing called “Meathead Mondays.”  In this series, I will be discussing my personal favorite muscle-y, earnest action movie heroes, and what better way to start than with Chris Hemsworth, currently starring in Thor: Ragnarok, and frankly, knocking it out of the goddamn park.  Seriously if you haven’t seen this frenetic hilarious masterpiece just go, now. 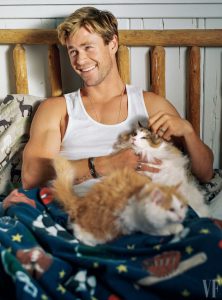 look at this
just look at it

My bb Christopher was born in Melbourne, Australia, and therefore when he speaks his vowels are wonderfully drunk, and I just really appreciate that country baking him into the tanned, blonde meat slab that he is.  He spent time in the literal outback, with buffalo and crocodiles and cattle (the cattle part is because that was his dad’s job while they were out there), and he was just turning into Crocodile Dundee.  This interview asks him about the manliest scar he has, and he literally stabbed his hand with a knife, and *Avril Lavigne voice* can I make it ANYmore OBvious.  It also ends with him making pancakes for the author.  It’s worth a read.  His two brothers, Luke and Liam, are also actors, and I don’t know what they feed Hemsworths, but it’s infused with sunshine and sparkly blue eyes.  That didn’t come out right. Ugh, I don’t know what I’m trying to say but he’s a goddamn Disney prince come to life and it is unreasonable how handsome he is. 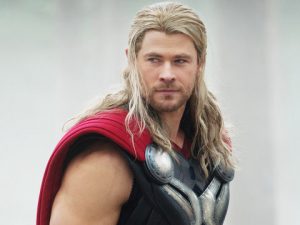 Thor.  Obviously Thor.  He *is* Thor.  Like, it’s very cute how there were auditions for other human beings to play this part when he clearly rode his motorcycle across the Pacific specifically to be a blond, large, enthusiastic bicep.  There was an SNL skit about it.  And he’s genuinely great at it, y’all.  Like let’s remember back to 2011 when we watched this movie and he smiled for Kat Dennings’ phone with his mouth full and he showed support for the diner’s coffee by smashing his mug on the floor.  Thor is a giant teddy bear who could bench press your car and make you breakfast and text thinking of you in the middle of your workday once he wins the day’s battle and quaffs some ale.  He’s lovely.  He cares about Loki.  And okay, I get the Tom Hiddleston appeal, I do, he’s a sincere, Shakespeare-loving, slim-suit-wearing bit of intellectual sunshine, but if I gotta pick? Thor.  Thor every time.  Like, just imagine the hoodies you could get out of this relationship.

Thor: The Dark World was… okay, it wasn’t great, but I wasn’t like “this was a waste of my time.”  And I just saw Ragnarok last night and GUYS.  GUUUUYYYYSSSS.  It’s so good, it’s SO GOOD.  He’s effing hilarious.  The cast around him is amazing, not to knock them at all, but my Large Blonde ThunderSon could carry this movie if he had to.  Please just go see it.  Taika Waititi did an amazing thing and my wholesome jacked kangaroo made it work.

First, Rush. I can’t watch this whole movie, because I don’t do so well with motor accident stuff, but he’s delightful and compulsively watchable, and you almost shouldn’t like him, because his character is the equivalent of the preppy jock bad guy in every 80s movie, but he’s just great, and the real, actual Niki Lauda, his rival in the film, said he did a great job.  Homie can act.

Second, In the Heart of the Sea.  This movie tried to do too much, but my boy is p good in it, and he got so involved that he willingly dropped like a jillion pounds to look like he was starving for this role, and while yes, he’s still obviously Hammy Hemmy, I appreciate his dedication.  Also read this book it’s v v good.

Third, the new Ghostbusters.  This punk was flippin’ hilarious in a room that included those 4 ladies, which is no small feat, and his little credits dance scene was the best thing that had happened to me up to that point.  His character was obviously supposed to be a parody of every dumb female eye candy character, and boyyyyy howdy did he nail it.  And the cast loved him and was frustrated with how perfect he is which just, yep, of course. Bro’s got comedy chops for dayyyyyzzzz and he’s so talented.

I haven’t seen him in Snow White and the Huntsman yet but I kinda want to just to see him muscle stuff around. And no, I didn’t see the reboot of Red Dawn even though it had him and my bae Peeta in it, because… eh, I had other stuff to do, probably.  Please don’t tell him I said that; I love him. 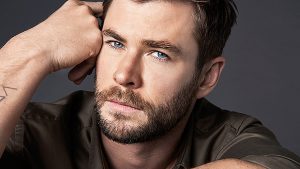 My dude is married to Elsa Pataky (no, really, it’s fine, their house is just a black hole of hotness), and he’s got three little ones, a daughter and twin sons, and he hasn’t named them anything horrifically stupid.  He moved back to Australia when he was secure enough in getting work because it’s home.  He got asked in an interview what his best kiss was and he said “my wife.”  My guy rides a motorcycle and wears a leather jacket doing it.  Would you like me to keep going? idek if I can because the stupid handsome wholesomeness is making my heart physically hurt.  If you want to high-key ruin your life, just go find any interview of him where he talks about his kids and how they ask “did papa fight the monsters” and NO, I’M NOT OKAY, OKAY?

Why does he deserve a blog entry

This shouldn’t be difficult to see.  My guy is 200+ pounds of fast-twitch muscle fibers, shiny teeth, and enthusiasm, and I love him.  There doesn’t seem to be a single story out there about “Chris Hemsworth is a jerk,” but there’s plenty out there about “he’s so decent and nice and willing to work that it might be holding him back.” He’s happy to show up to SNL to make fun of himself, but he’s also self-conscious about getting handed a role like Thor and what that could mean for a huge movie and an iconic character.  He puts in the work.  He gives credit to the bonkers talented people around him.  And he’s self-aware enough to get that his physical appearance has AC/DC’s “Thunderstruck” as its theme music.

I get that there’s an attraction to the brooding, intense, intellectual, emotional, unconventional **actor** profile, but that doesn’t really do it for me.  And, to be frank, neither will just borderline-offensive handsomeness.  But this dude is like, cut, from marble, if marble were infused with good hair days and sincere compliments, and he’s just a Good Dude.  He’s freaking hilarious with incredible comedic timing and delivery and he works so hard and I’m just *tearing up* SO PROUD OF HIM.  Buddy wore a green velvet suit onto Jimmy Kimmel and made it work because HE KNOWS WHAT WORK IS I’m sorry.

I’ll leave you with this last parting shot of his Golden Ray-tio of Sunshine face and let you fall a little bit in love with my bb Rock of Ages as well. 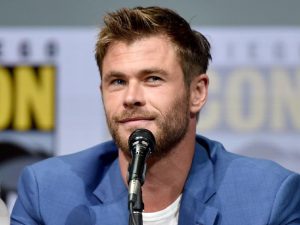