Awwww yes we back we back.  I’m… I’m assuming you missed this?  Anyway.

Andrew and I went to see Rampage the week of its release, because I am a Dwayne Johnson fangirl and would watch him raise alternating eyebrows for 110 minutes, and it was fun!  Like a solid B, B+ monster movie with exceptional-looking monster CGI and it was worth the ticket price.  Obviously, my perfect bald bb (WHO NOW HAS ANOTHER LITTLE BABY EEEE) was wonderful in it, but this week, I am not here to talk about him.  I am here to talk about another gentleman in Rampage, and that is Mr. Joseph Manganiello.

This guy.  This GUY.  He looks like if you could wish a romance cover into life and then took you on a hike.  His role in Rampage is uh, not significantly longer than what was in the trailer.  He’s alive and on-screen for like ten total minutes and he’s just deliciously rugged and absurd and I don’t even know why he took this role but it is great!!!  He fights a huge wolf! I hope it is a smug reference to his werewolf role on True Blood! Because this guy has a goddamn fine arts degree from goddamn Carnegie Mellon with Shakespeare theater training and he was like “yeah sure I’ll carry a gun in the woods for 8 minutes and fight a wolf.” Let me continue to explain why I love him so much.

My buff wolfie is a Pittsburgh OG with an Italian-American dad and an Armenian-Croatian-German-American mama and while I was able to look at his last name and not feel fear that might not be the case for everyone.  He was captain of like, every sports team ever in school, and, AND, played Jud goddamn Fry in his school’s production of “Oklahoma!” which hurts my head if I think about it too much but in a good way???  He tried out for the theater program at Carnegie Mellon as a senior but did not make it in, so he went to Pitt for a year, tried out again, and made it in.  Broseph MANganiello has a fucking BFA from CARNEGIE MELLON’S ACTING PROGRAM.  I know I’m harping on this, but like, homie can act. This is not meant to imply that formal training is what makes a good actor, but like, he did Ibsen and musicals and was LORENZO in WILLIAM ACTUAL SHAKESPEARE’S MERCHANT OF VENICE.  Like???  He is a beefcake with brains.  A braincake.  I… have made an error with that last word but like MY TALENTED LITTLE DELTOID I LOVE YOU

Also his childhood gave us this photo 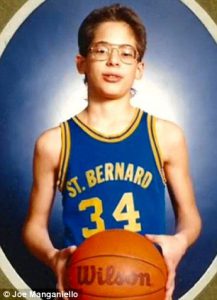 There’s hope for all of us, apparently

Spider-Man! The original! He played Flash Thompson! He tried to hit Tobey Maguire! He had actually been auditioning for Peter Parker and I’m low-key happy he didn’t get it because I don’t think he’d fit, but I’m also sad because we missed out on his doing the entire Venom-influenced emo Peter thing from Spider-Man 3 and I would pay several ticket prices’ worth to watch him do that horrible hair flip.  His costuming was a LEWK for 2002.

this polo
he’s even making this terrible polo look okay

True Blood. This is not a show I watched because I am too delicate to live (wait, but you watch Game of Thrones?? yes, yes I do, but I made it through the first 4 seasons by being smugly aware of 90% of the events before they happened and now I’m fueled by anger ANYWAY), but even I knew he was a wolfie in this show.  Does this surprise anyone?  Like, what was this audition like?

His actual just-walkin’-around hair and face look like that second step in an Animorphs book before it looks really messed up, and I mean that in the best way.  Dude is part wolf.  I’m assuming the directors asked him if he even needed fake canines because he could probably grow them himself.  He spent time with wolves to research his role.  Just chillin’ with some of his pack, y’know.

And then, of course, Magic Mike. We have been over this, that I only saw the second one, but his character’s name is legitimately Big Dick Ritchie and whatever assumption you’ve made, reject it.  He is a large earnest puppy dog of abdominals and effort and he really wants to find a woman and be the best possible at his craft.  He reworks his entire routine to be a wedding and marriage and bangin’ and he does this because he believes a woman would really appreciate this fantasy.  His two songs are “Marry Me,” sung by Donald Glover, and then Nine Inch Nails’ “Closer.” I don’t know how to explain how delightful this is.  Ritchie will carry you over the threshold and accidentally slam your head into the door frame but then will get you ice and 100 pillows and all the ice cream and change the channel for you while painting your toenails and then as soon as you’re feeling better he will have sex with you in your favorite position.  I don’t know how much acting was involved for Joe but he is so flippin endearing in this throwaway role and just, my HEART

How I Met Your Mother. No, seriously, hear me out.  He plays Brad Morris in the series, one of Marshall’s law buddies, and one episode has him facing off against Marshall on a pond pollution case and fight me, it’s one of the best scenes of the series.  Please just go watch this collection of clips and be happy.  “Objection, Your Honor, on the grounds that this is *redonk*” is the best line in the entire world and FITE ME I WILL DEFEND THIS PERFECT PORTRAYAL FOREVER.  He loves brunch and invites Marshall to go with him a lot.  Comedic timing, excellent use of a-bro-viations, just, I’m so proud.  MY GUY CAN ACT COME AT ME 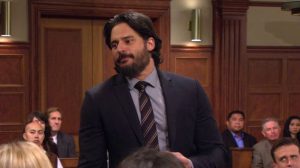 voir the heck out of that dire, bud

And then, stay with me, Critical Role. If you have not heard of this, it is a web series involving professional voice actors who play Dungeons and Dragons.  I am a casual fan but it is really just so excellent, and Broseph showed up and did an episode because he played this game all the time as a kid and he does great. He’s excited and wears a red t-shirt and is just so psyched to be there, but not in a “heh heh yeah I used to do this but then I got SWOLE so I guess I can come back and bless your little show with some TRAPS” kinda way.  He just wants to play some D&D and despite being chiseled from granite and oak he fits in perfectly and at one point uses Hellish Rebuke, swears in celebration, looks down, and asks the DM “you can say f*** on the internet, right?” It’s fine, it’s fine, I’m fine don’t TOUCH ME

He also did an introduction to his episode talking about being a nerd and it is also absolutely worth the time because he talks about D&D being a gateway for him to other nerd stuff but again, not like “yeah I have a picture of that one ripped orc dude from the first movie hanging up on the mirror in front of my bench press so I can be aware of my goals on Chest Day” but like “here’s my childhood!  this stuff was awesome! I’m so happy to be here and be with you guys and talk to you guys and wear this t-shirt and say ‘paladin’ and be alive WOOOOOO”

He married Sofia Vergara.  They are hoarding the world’s beauty and I’m not even mad about it because they are so very sweet to each other and she has been going through some absolute garbage with her ex regarding embryos that are currently stored and it is a *mess* and he’s being so supportive and I just want them to be happy.  I will never learn my lesson about celebrity couples but here is another one I hope makes it.

He loves the Steelers and the Penguins and has an Emmy for narrating a documentary about the Penguins.  Flippin adorable boulder won an Emmy and got to talk about his team, this is SO SWEET.

He is also a… model? for Eddie Bauer.  I hesitate to say “model” because he isn’t on a catwalk and there are no abs and it’s not really about his being handsome: they pay him to wear their tech stuff and go test it out in the wilderness, so he’s like kayaking and hiking and rock climbing and just being the rugged wolfie that he is and he is just so earnest about the outdoors and the world and then Eddie Bauer gets to publish pictures like this 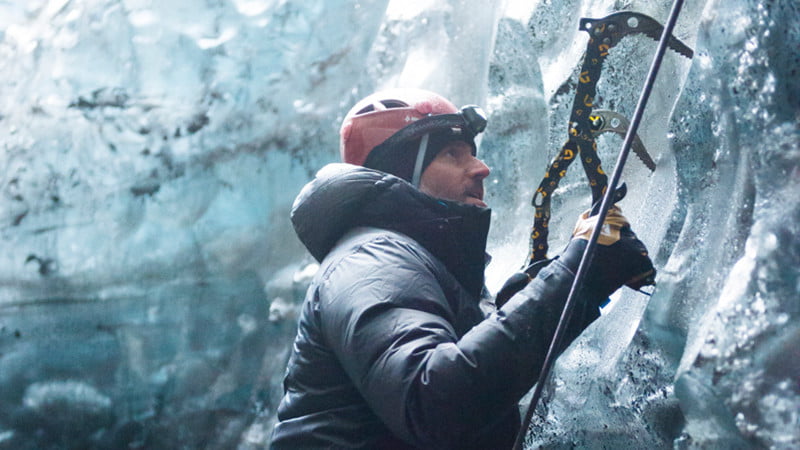 He is just so incredibly earnest and thankful and Excited to Be Here wherever here is.  He wrote a book called “Evolution” and it is a workout and diet regimen that helped him get in werewolf shape and he sold it as a thing for normal humans and to be honest none of us should even attempt to do the stuff in this book but Joe Manganiello believes in me, he believes in you, he knows you can accomplish your dreams and he doesn’t want to hear your excuses but he’s proud of you already.  (If you have not read Nicole Cliffe’s excellent article about reading his book and following the regimen please do) If you read like 4 pages of this book you will start feeling like you should work on your pectorals. 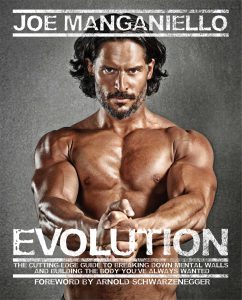 Joey M Believes In You

He knows he is a beefcake.  He is aware that his jawline could slice a tomato and his abs are a topographical map of the Andes and his hair could sell conditioner to Vidal Sassoon.  And he’s happy to use those things in a role if it makes sense – he’ll be Ritchie, he’ll be Alcide, he’ll bend down to get a pen in a courtroom in HIMYM.  He’ll wear the tight shirts and take the shirtless pictures and do the winks and the smiles and he’ll nod at the wolf-whistles.

But then he’s gonna go climb an ice wall or paddle a kayak or kiss his wife or roll for damage or audition for a part where his face is gonna be scarred or show up on every possible red carpet and be super nice to his fans.  He wants you to increase your max squat.  He wants you to come over and play D&D.  He wants you to run lines with him for A Doll’s House since it opens in 3 weeks and he’s playing Torvald and he doesn’t want to mess it up.  If it’s not good enough, he will make it better.  This is a man who played Stanley Kowalski in A Streetcar Named Desire, on stage, TWICE, one at the Yale Repertory Theater.  He is so goshdarn earnest and hardworking and talented in a jillion different areas and he just Gets It Done.  He is Helen Hunt and the world is Jack Nicholson.  (Please kindly get my As Good As It Gets reference.)  I think he could absolutely wreck us with a good dramatic film role, and I’m crossing my fingers that he gets that chance.

Until then, I will be doing bicep curls and inviting him to hike the Appalachian Trail but wrap up in time to help him rehearse his audition monologue.  TEAM JOE TEAM GO

I just have a lot of feelings about Ron and Hermione

A definitive ranking of household chores