I honestly debated saving my Vinny till later, just to savor the slow burn of my readers’ anticipation oh my GOD I am joking you were not waiting for this post but you’re reading it anyway and I thank you for that, it makes me feel relevant.

There was truly no way I would skip my precious hard-boiled-egghead bb Mr. Diesel, whom I adore with the fire of a thousand suns and zero shirt sleeves, and given the Fast and Furious beef that has now extended into a second year, I figured this is as good a time as any to talk about my fuel-efficient commercial trucker of a person.

[Aside: Vin’s got one or two crappy interviews under his belt with female interviewers where he calls them beautiful and they’re just trying to do their jobs: I’m not psyched or defending those, all your faves are problematic, etc etc]

Hopefully you made this connection, but no, Vin Diesel is not his birth name.  My little musclepile was born Mark Sinclair, with a fraternal twin brother named Paul.  His mama remarried a man named Irving Vincent and his brother now goes by Paul Vincent.  Vin hasn’t met his biological dad, but his mom is white, and he’s always been pretty upfront about being a person of color without being specific. [He’s got people who would like him to be less ambiguous about his ethnicity, and I get that, but part of me likes how he refuses to disclose – it kinda just makes all those “well what *are* you” questions sound gross.]  He grew up in New York City  but did he really??? because I just feel like he is densely from California because I cannot discern where Vin ends and Dom begins. 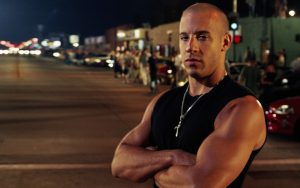 NO SLEEVES ALLOWED UNLESS THEY SLEEVES OF RITZ CRACKERS

Riddick. Shut up, you probably saw Pitch Black and maybe The Chronicles of Riddick or maybe something idk you’re at least aware of it.  My liddul anti-hero in space I love him.  “But these movies are bad” you know what? you’re not better than me and Dame Judi Dench was in the second one so we all make some decisions, folks.

My shiny earnest son was also Groot obvs and “he doesn’t even do anything” uh fiteeeeee meeeee????!!!  Groot is Grooeat. 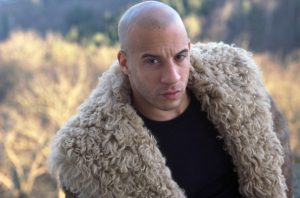 UR MACKLEMORE COULD NEVER

Last, and certainly not least, my guy.  My boy.  My Toretto. Can’t have world domination without Dom.  You know him and love him from The Fast and the Furious, and he’s been in movies, 1, 3 (sort of, cameo), 4, 5, 6, 7, and 8, plus a little fun short film between 3 and 4.  He produces them, he promotes them, he is one of the OGs, and fight me again and more, I adore these stupid, stupid movies.  I have now seen 6, 7, and 8 in the theaters, and cried during 7 and 8, and I would do it over again.  My wonderful gravelly-voiced animated tank top is the grumpy, emotive glue that is holding these movies together, and I will honestly never mock him for taking them seriously.  He’s earnest, he’s having fun, they’re his baby, and they’re enjoyable as hell. 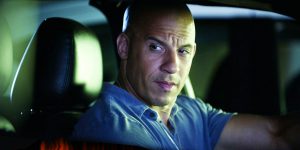 my guy and my dog both do good forehead wrinkles

So my shavepate bb made a 20-minute short film in the mid-90s called Multi-Facial that is about a multi-racial actor trying to get roles and it went to Cannes and Spielberg saw him in it and cast him in Saving Private Ryan. I haven’t seen it, because it is challenging to get a copy, but yo, your little short film was good enough to get you into SPR, like. Bud. My buddy. Also, to be honest, I know he  (spoiler) doesn’t make it that long into the film but I like him in it and he is an injection of slight non-whiteness into a veeeeeery white movie and idk idk SPR is impossible for me to rewatch because I am DELICUTT but I like him, okay I really do his little paisan-hero-y-doofus-yo-Adrian.

Also, The Iron Giant. My heart, my stupid heart.  This is an animated film from the late 90s and he does the voice work for, well, the Giant and if you don’t remember this movie go back and watch it and let your heart be low-key blackmailed into feeling something because you will, I dare you not to.  This movie is gorg and guys, he does so good with the voice acting guys, guysssss. GRAVELLY METAL-VOICED CANYON-ECHOED RUMBLY BB.

And here’s the last one go ahead and laugh: The Pacifier. Friendos, if you dislike this movie, please come meet me outside for… okay, a *very short* fistfight, with a lot of crying, but please know that my weak punches are the best of my defensive ability and this movie deserves my best. If you’re unfamiliar, Vin Diesel plays Lieutenant Shane Wolfe, a Navy SEAL, who was part of a mission to protect a secret government project and the scientist who developed it.  The scientist is killed, and his widow needs to travel to Zurich to open a safety deposit box, so Shane is assigned to look after the 5 kids, who range from a teenage Brittany Snow (no really actually her) to a baby.  Hijinks ensue.

This silly little movie is so flipping cute.  Andrew and I will still quote from it, especially the part where he tries to nickname the kids as Red 1 through 4 and then Red Baby. (Every baby is Red Baby for at least a minute.) The second youngest boy doesn’t go to sleep unless you sing him the Peter Panda song, with its accompanying dance, and guys, if you’ve never seen Vin Diesel do the Peter Panda song you are missing out like you wouldn’t believe.

Vinny bb is with Paola Jimenez, a model from Mexico, and has been for a long while.  They have three kiddos: Hania, Vincent, and Pauline, and his youngest is named after Paul Walker, and no it’s fine I’m not crying I’m just crying a lot.  He’s spoken about being deliberately out of the spotlight somewhat, and he doesn’t put more of his life out there than he has to, and I respect that.  His oldest also does like some kind of martial arts so if she could be in the next F&F movie that would be A+. 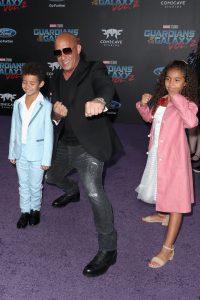 STOP IT
U STOP IT

My sleeveless wonder was also a huuuuuuuuge Dungeons and Dragons player for like, decades, and this just makes me really flippin’ happy.  And like, veeeery into it.  Guy has a tattoo of his character’s name on his torso, and there’s a video of him DMing and I just *starry eyes* 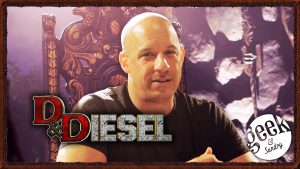 He is earnest and tries and is very open with his feelings and I just appreciate that, yo.  I don’t know if he’s a great actor, but he’s  a great actor to *me*, ya feel?  Like I doubt he’ll be up for an Oscar but I legitimately don’t care?   but he genuinely loves the stuff he works on, and tries really hard, and I just super appreciate effort, okay?

If you’ve been paying attention, there’s also been Beef between him and Dwayne Johnson on the set of The Fate of the Furious and I was emotionally a bit of a wreck because I don’t want the two of them fighting.  Yes, Dwayne’s injection into the series for Fast Five was adrenaline and sunshine, and the movies from there have improved in quality, but the biceps and the chase scenes and the ridiculousness were Vin and Paul Walker as the OGs and they could absolutely still hold a scene without Dwayne.  (Specifically the train heist at the beginning of Five. Yes, I realize they drag a police safe through the streets of Rio in this movie but I actually think the opening caper is the best one.)

I also can understand my bb’s frustration and sadness with losing his best friend, having a movie studio decide to finish the movie with motion capture and CGI, and then just kinda… moving on.  Vin and Paul built this series, and Paul died horribly, and Vin has to just like, keep working like it’s okay.  He’s still grieving, and you hear it in interviews (he’s been quoted saying ‘the studio cares about pixels over people’), and he’s had to do this all publicly, and then the thing they built together is getting pulled away from him more and more.  Have I thought about this way too much?  Yeah, maybe, but the day I can’t feel sympathy for a guy who lost his best friend and then had to finish a movie where that friendship is the central relationship is not a day that’s happening.

I like him.  He’s an enthusiastic, emotional dork whose voice is permanently down a well, and I’m happy to hand him money for the movies he makes.