Game of Thrones/A Song of Ice and Fire, Nerding

GUESS WHO’S BACK / BACK AGAIN

Hey there fellow kids, I a back reviewing this on-fire garbage can of a show because I hate myself I guess idk idk.

Okay so realtalk Ghost is the best part of this show don’t @ me.  Just an all-around great pupper and I will hear no discussion of the matter.

So I am not hating on how they’re handling this right now??? Like I’m honestly not mad?  Davos is Davos-ing real good: I particularly enjoyed his “you’ll have to come back later we’re trying to escape” line to Alliser Thorne.  Davos is best when he’s assessing the situation in a Gimli-esque fashion and he did a great job.  Also shoutout to Dolorous Edd for making me tear up.  Man, I hope that Kit had to actually lie there for all of these scenes, especially the ones where his eyes are open. “Kit don’t laugh, you’re messing up the shot. Don’t laugh, Kit. CHRISTOPHER, DO NOT LAUGH”

Alliser Thorne’s speech (despite being lit by a single candle a mile away like COME ON I get it but we wanna actually SEE the show) was quite good, and I don’t even mind that the dialect coach was like “okay I need you to sound like a slightly sloshed Edinburgh man in a pub after a hard-fought football win…no but even more accent.  More than that.  Keep going, I’ll tell you when.” In general, though, this is something I could picture happening in the books. Davos isn’t there when this goes down, but *shrug* I’m on board, and I’m interested to see how the wildlings play out.

If Melisandre could get like 5 minutes where she’s not trying to fuck someone that would be A+, and yes I am counting 1. the dudebros in the audience and 2. herself in a mirror.  This was also a silly reveal for me.  She can do magic.  We know. We read it in Hogwarts, a History.  Who cares. From my reading of the books she could be a crocodile for all we know. Emilio Unimpresstevez.  Additionally, a ton of the fandom lost their minds because we saw an older woman naked and OH MY GOD MY EYES.  Earlier in the episode we saw a spear come out of a man’s head but yes by all means continue in the vein of “elderly nudity is always repulsive.” Do better, show.

What can stay, though, is Roose Bolton’s consistent and complete disappointment in his son.  His brand is disdain and I am Here For It. Also thank you boo for the shoutout to Fat Walda, my favorite tertiary character, may she live forever.

And then we have Sansa and Reek and Brienne and Pod, and I don’t even care that perhaps it would have been difficult for Brienne to find them, because this scene was perfection.  Like I am borderline willing to forgive them for the rest of this episode because this scene exists.  Gwendoline Christie was criminally underused in The Force Awakens and I want to cry if I think about her or Brienne or this scene too much.  She just gives Sansa this look like she’s got a reason to live and to be a knight again, and Sansa AND Reek AND Pod all look at Brienne like their avenging angel savior.  And Pod prompting Sansa’s half of the oath???? TEARS FOR DAYS

This is the first time Sansa’s been around a person who is looking out for her in years and this is her FIRST HUG IN YEARS and oh God my heart my HEART, GUYS

The entire Faith of the Seven plotline is being compared to the Inquisition with the subtlety of an axe wound and it looks like they’re going for two axe wounds this season.  We gon’ drag this out a few more eps, huh? Great, wake me up when Sept-ember ends

Jaime’s face on that boat is “yeah boo idk our daughter is non-canonically dead I don’t know what to tell you” and it’s kinda sad but it’s also kinda stupid. You know what else was stupid? Jaime’s speech to Cersei about “we will take back everything they took from us and more.” Homie, you are down two kids and a sword hand, it’s not like your apartment refused to give back your security deposit.  “Don’t worry Cersei, I will GROW ANOTHER HAND” like what is your goal here dude

What happened here.  Like. Did we try, to do anything, at all, or.  Like you had Alexander Siddig (!!!) as Doran Martell (!!!!) and you did absolutely nothing and then killed him.  My assumption is that Siddig went to the producers and was like “okay I’ve watched Season 5 and you need to get me off this fucking sinking ship immediately no I don’t care if you murder me I am DONE” and then they in fact murdered him.

Let’s set aside that book Ellaria is a flower made of feelings and really doesn’t want to see any more death.  Let’s set aside that Arianne is not in the show at all.  Let’s set aside the fact that portraying the Sand Snakes as Ellaria’s kids on the show is some Sally-Field-is-Tom-Hanks’-Mom-in-Forrest-Gump-level fantasy.  This entire plot line is so freaking stupid I don’t even know what to do.  Family is dead so let’s kill more family including Trystane whose only crime is having good hair?  Doran is stupid enough to get dead that way?  Areo Hotah??? is stupid enough??? to get dead that way??? And the Sand Snakes are absolute show poison and remind me of that weird bad lady in Transporter 2 (screw you guys I’m not the only one who likes Jason Statham)

The whole Oberyn thing is like a version of Louis CK’s “Of Course But Maybe” sketch.  Of course, when a person is killed in a fight to the death, it’s sad, of *course*.  It’s especially horrible when it’s incredibly violent and vicious, and the deceased’s family is there to see him die.  Of COURSE. …but *maybe*, if you volunteer as a champion in a trial by combat that is by law going to end in death and the guy you’re fighting is called The Mountain and he’s like basically undefeated and he kills you while you’re monologue-ing, it’s a tiny bit your fault??  Maybe, if you pick up a spear and come after a guy and the guy comes back at you, it’s not that weird??

If I have to watch one more dramatic walk and talk on the parapets between Tyrion and Varys I stg like DO SOMETHING. ANYTHING.  Like maybe GUARD YOUR SHIPS, YOU DOOFUSES.  Tyrion is fascinating as a character but the show’s insistence on just handing him things is just obnoxious and nap-inducing.  And Tyrion, don’t worry about your Valyrian not being so good, since they’re writing “Kill the Masters” in English on the walls so *shrug*. I will give them props for Varys’ sassy comeback to Tyrion’s “we have to make them feel she hasn’t abandoned them” line, because “she did fly the fuck away on a dragon and hasn’t come back so” is pretty great.  Otherwise, I don’t care and I’m still mad about Barristan so this bodes well obvs.

And as to Dany, I’m not entirely sure how no one in charge of this khalasar knows who she is. Like there are not many white-haired queen-looking people around, and while I get they are supposed to be some kind of Noble Independent Savage (seriously the show aaaand the book to be honest started poorly with the Dothraki portrayal and has not gotten less racist) but does NO ONE know who she is???

This entire set of scenes squicked me out pretty badly.  They took the time to develop a whole new language and they wasted it on “I banged your grandma” jokes, which are awful jokes to begin with and even *less* okay because Dany is walking next to two men who are chatting about how they’ll rape her.  Like on what planet is this supposed to be amusing?  I don’t know if the goal there was to show how smart Dany is because she understands what they’re saying, but that doesn’t give her any power.  She just knows more details about her awful situation.  Same goes for her meeting Khal Moro: hahaha yeah we havin a battle about what the best thing in the world is while this lady is waiting to die NOPE NO THANKS.

And now to everyone’s favorite Baritone 2 at the Renaissance Faire’s “Lord Blakely’s Merry Men,” we have Daario, doing his absolute best to combine Aragorn’s scruffiness with Legolas’ distant looks and trying my patience to its ABSOLUTE LIMIT.  YOU ARE THE MOST GENERIC MAN EVER TO SIT ATOP A HORSE, AND I WILL NEVER UNDERSTAND YOUR APPEAL. 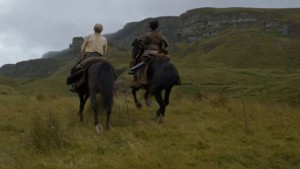 This. This scene.  This is why I started reading A Song of Ice and Fire.  I wanted to watch one bro tease another bro about not being able to get that blonde queen booty while he most definitely has, while the second bro plots the first bro’s death and tries to remember the guitar fingerings for “Creep.”  This is what I signed up for and this is why I’m here.  This entire plotline needs to get greyscale I hate everything whyyyyy