You guys probably already know why I’m mad, so I’ll leave that till last.  Extra unfortunate because I really liked this episode otherwise.

Guysssss I kinda always liked Ser Dontos in the books even though he’s vaguely incompetent at everything.  Maybe it’s because that would be my role in Westeros.  Bad at everything.  #WeAreAllSerDontos. Loving how Sansa’s necklace is apparently rock candy, because sure, why not.  Littlefinger is acting like a winking combination of Scar from the Lion King and Jafar from Aladdin (Jascar?) and I really don’t know who is responsible for his direction but it is some straight up “run, Simba, run far awayyyyy, and NEVER retuuuuurn” weirdness.  Make it more subtle or it’s laughable.  Some part of this is the futile attempt to cover Aidan Gillen’s Irish accent, which I think they should have let him keep.  Or tried harder.  Or something.  I know this is an American audience and we supposedly can’t tell the difference between Queen Elizabeth II inviting us for tea and a pub fight in Cardiff but goddamn it can we try for some consistency? (I’m looking at you, Tyrion/Stark family/basically everyone except Rose Leslie as Ygritte because she’s killing it).

Stannis/Davos/Shireen
Can we just let Shireen sit the Iron Throne?  I love her.  Anyway, Stephen Dillane as Stannis has been absolutely excellent for three years now, but I actually think his short scene with Davos was perhaps his finest to date.  His remark that his claim will be forgotten if he doesn’t act actually made me sad for him, and I think that’s completely due to Dillane’s acting, especially since Melisandre wasn’t there to out-drama him.  Also Shireen and Davos have my favorite friendship on the show, and Davos is excellent.  He was my new favorite POV in A Clash of Kings.  I don’t know what it is that makes me like him so much, I just do, okay?

Sam/Gilly/Jon/Ygritte/Wildlings Of Death
All those who pretty much want to shake the two of them and be like MAKE OUT ALREADY say “aye”
*literally the entire world* AYE
God, they’re cute.  Also def wondering whose baby that is.  Not sure why I want to know, I just do.  Also thanks for the random toplessness of the barmaids/nameless whores TOTES MISSED OUT ON SEEING THAT FOR LIKE 7 MINUTES THANKS.  I’m really unclear on why we decided to make the Thenns cannibals (in the books they’re like a “non-barbaric” society and in the show we’ve spent a lot of time saying that there’s no difference between the wildlings and those below the Wall), but it’s gross and that poor little kid and ughhhh.  I know you gotta get the kid to run fast to Castle Black but that was just extra gross.
It is borderline unreal how screwed the Night’s Watch is, and how lovely Jon’s hair still looks.  For those about to deep-condition, we salute you.

Tyrion/Pod
POOOOOODDDD.  Little Podrick Payne, all my feelings.  He’s definitely a bit savvier in the show than he is in the books, but I’ve kind of loved him the whole time.  I really don’t have anything else to say; this scene was great.

Tywin
“He always has that look, you know?” – Andrew
“Yeah, I can’t describe it, it’s just like this, smirk, thing?” – Me
“His FACE is sassy.” – Andrew
That would be my wonderful boyfriend describing Charles Dance.  I loved his speech to Tommen about what makes a good king (they recast Tommen and I have no idea how big a role he’s playing but the new actor is doing a great job being pliable and a little slow), and especially how he ended it.  “A wise king trusts his advisors. Oh would you look at that I’M an advisor TRUST ME LET ME RUN THIS PLACE OHWAIT I TOTES DO THAT NOW” Tywinnnnn you da greatest.  My friend Baird said that Charles Dance probably just walked into the casting office in costume and that was it.

Oberyn
Hey, you know what totally works now that we’ve introduced Oberyn and Ellaria as the cool people they are and isn’t weirdly fetishizing and gross?  A sex scene.  AND it shows bisexuality in a good light? AND it lets Oberyn explain everything? BE STILL MY HEA-
Ohhh, we’re going to give all the lines to the male prostitute?  The two naked women still don’t talk?  And they’re not the only line-less naked women in the show?  And the main characters stay clothed in this supposedly *~*crAzY*~* sex scene?  One step forward, two steps back.  And one tiny baby step forward for Tywin’s “they do not pay me enough for this shit” face he made while standing there watching the naked people file out.
Really looking forward to watching the trial for all the reasons.  My last Dorne-related thing is plz stop calling each other “lover.”  Not really for any other reason than the word squicks me out and I’m waiting for you to jump into a hot tub and break into an SNL skit.

Daenerys
For the book readers among you (don’t worry, this isn’t a spoiler if you haven’t, it’s safe to read on), they sneakily introduced Hizdahr zo Loraq this episode. 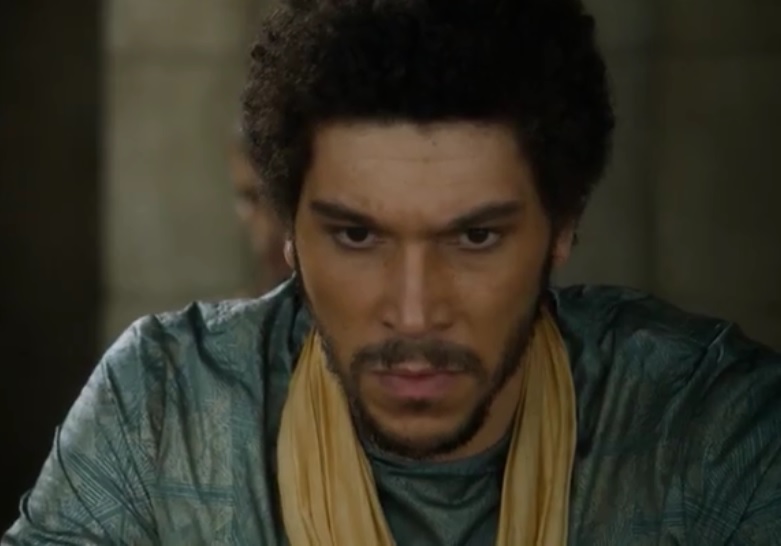 He was one of the many people standing on the walls of Meereen, and is continuing in the fine Game of Thrones tradition of “literally everyone on this show can get it.”

I continue to be on #TeamGreyWorm, and also #TeamMissandei and now I want them to get together.  She is actually the cutest human when translating the Meereenese champion’s insults.  She is a child in the books, but eh, you know what? This works.

It is not possible for Daario to be more generic than he is.  In the books, he has this great gives-zero-fucks attitude and this blue beard and is INTERESTING if incredibly reckless and violent.  Our Daario here looks like an extra from “King Arthur” who hasn’t worked anything bigger than a ren faire since.  Oh, but he WINKED at Daenerys oooooo how dangerousssss and sexyyyyy TRY HARDER, HBO.  Dany has actual dragons and has conquered cities and you’re gonna let her be won over by Foot Soldier #3.  (I will give them this, his knife throwing thing was cool.)

Emilia Clarke is lovely as ever and could go up against Charles Dance in a “300% done with your shit”-expression contest.  I would pay to watch that.  I’m assuming they’re letting her use the same type of Valyrian for each city (the dialects are supposed to be very different), but frankly, not a big deal, and Clarke is speaking it like 1. it IS her mother tongue 2. it’s an actual language.  I get chills when she speaks Valyrian.  MOAR VALYRIAN.  My one concern with her here is that we don’t have a ton more plot from book 3 and she’s missing from book 4, so I hope they pace this properly.

Nopenopenope
You know what this is.  Once again, this stupid, stupid show chooses to use rape as an unnecessary plot device.  Dany is raped by Drogo in the first season, which is a change from the books.  I would state that it is basically impossible for 14-year-old book Dany to give her consent to a much older Khal Drogo to whom she’s essentially been sold in a language she doesn’t speak, but book Drogo makes an attempt to gain her consent. Not so in the show.

Same for Jaime and Cersei.  In the books, Jaime returns from the war after the wedding, and yes, twin incest sex occurs in the Westeros equivalent of a church while Joffrey’s body is laid out.  I’m not saying it’s not creepy.  But Cersei gives her consent.  It’s not given immediately, but it’s given completely, and it’s implied that the borderline-nonconsent at the beginning of the encounter is a common aspect of their sexplay.

AAAAAND then we have this fucking show.  Cersei NEVER gives consent, and is crying throughout.  She attempts to push him off, and says “no” about a half dozen times.  She does not consent at any point before the scene cuts away.
Here’s my two main issues here, NOT in order of importance.

1. This ruins Jaime’s character development
Jaime. Is. Not. A. Rapist.  What end is served by making him a rapist?  The scene is written from Jaime’s POV in the books, and unless he’s imagining Cersei’s speech, she gives him her consent.  He’s not an actual good guy, but the stuff he does that’s extra terrible have been for Cersei (including pushing Bran off the tower).  He protects Brienne from rape when they’re captured.  He knows that when towns are sacked, the soldiers rape women.  He’s literally the only man Cersei trusts, and he would NOT ruin that by raping her.  Good luck with his character development now, gentlemen, because you’ve ruined him for all the book readers and many show watchers.

2. I am so fucking done with rape as a plot device and the men who excuse it
We already got an added “Dany is raped by Drogo” scene to make her seem more sympathetic, or something, because we’re too stupid to figure it out?  Did you have Jaime rape Cersei to make her seem more sympathetic?  Were you not aware that many fans hate her and this is therefore very irresponsible of you?  My friend Sarah commented that she doesn’t want to look to see how many people are saying something along the lines of “she deserved it.”

The scariest part for me, however, is how many people wrote, shot, and approved this scene without realizing how beyond fucked up it is.  Even Nikolaj Coster-Waldau, when asked if the scene was rape, replied “Yes and no.”  NOPE NOPE NOPE NOPE NOPE.  Something is rape or it isn’t, and THIS WAS RAPE.  He forced himself on her (with a previous line that seemed to blame the gods for what he was about to do?) without her consent = that is rape.  I’m incredibly sad that of the dozens, maybe hundreds of people who were aware of this scene didn’t say “this isn’t just weird twin incest sex, this is actual rape.”  This terrifies me that none of those people could identify coercive sex in a real setting, either.

I’m sorry to end this on such an angry note, but this is important.  I always say that you don’t have to share my opinions on this show, but this is an exception.  If you’re reading this, please understand that you need to view Jaime and Cersei’s scene as sexual assault, because that’s what it is.  This is important.

If you haven’t read the books, I would be very interested to find out if you felt this was way out of Jaime’s character, or if you’re not surprised by it.

Game of Thrones Season 5, Episode 1: The Wars to Come

Game of Thrones Season 4, Episode 2 “The Lion and the Rose”